It’s been a minute, eh? I’ve gotten a few messages asking about this update…so here it is.

Yes, it’s late. No, there’s nothing wrong with the site.

I just haven’t gotten about to writing up this post until now.

If this is your first time here, the I suggest catching up on the old updates first:

I’m still really excited with how it’s going with the site, so let’s dive in!

If you recall from my previous update, my analytics got fucked by referral spam.

Well, as unbelievable as it is, something similar happened to my analytics for this site AGAIN. 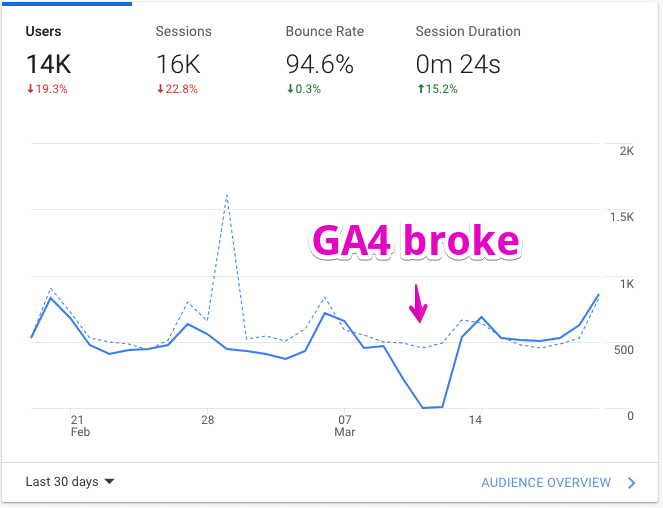 So, I’m having to use that shiny new version of Google Analytics and things had been going along just swell and then BAM, it broke.

You’ll notice that my problems lasted more than a day.

That’s because I thought I’d fixed it after reading this article. I didn’t fix it.

I installed the Tag Assistant Legacy Chrome extension to confirm that it was still broken. And I spent way too long trying to fix this when there was a simple solution.

I just installed the Analytify free plugin to connect the site to Analytics and confirmed it worked with that Chrome extension.

Since the site is running Ezoic, I can sort of guesstimate that missing traffic. I think it was likely around 20K sessions for that 30-day period.

Now, personally this means that I am a bit behind on the goal that I set myself for this site. You see, I was hoping to hit 50K sessions by month six.

But, I had that unexpected move that put me behind by more than a month and lately I just haven’t had the time to get as many articles up as I’d like.

So, I’m recalibrating that goal and setting it for month nine now. Hopefully I can hustle and make it happen!

The new keywords report does show a slight decline in keyword positions.

This site still has loads of featured snippets, and Ahrefs is showing keywords as “lost” that this site still ranks for — so I think there might be something off with their keyword movements reporting.

Honestly, it’s not something that I’m worried about and I just keep plowing money into new content for the site because traffic and money are still trending in the right direction for the site.

Right now this site is monetized with Ezoic and a couple of Amazon links.

I also have a few private affiliate program links on the site, and I saw my first commission from one of those programs.

That’s almost 3x the income from the previous month!

This income came from:

If you’re curious about the breakdown of income, that looks like this:

I’m really happy with how well Ezoic is performing on this site. You can see February’s EPMV below:

And remember, my AdSense RPM on this site was around $7.00 before switching over to Ezoic .

In regards to backlinks, I just want to remind you that I’m not planning on doing any link building for this site anytime in the near future.

That’s the whole reason for buying an aged domain from Odys.

I managed to get 21 new articles up on the site, which was less than I’d hoped for but still a decent amount.

And I’m really stoked about the income jump this site had this month.

Here’s how the six month of this new site looked:

In the next update for this case study, expect to see my content expenses increase a bit.

As I mentioned in the last update, April marks the start of me using both WordAgents and a dedicated freelance writer to grow this site as quickly as possible.

You’ll notice one thing missing in this update is that I never got around to doing Pinterest for this site.

Still a big failure on my part since I know there’s good traffic there.