Image copyright is one of those things that I’ve discovered very few SEOs and bloggers actually understand. As a result, some ne’er-do-wells are using this information to their advantage and scamming their way to free backlinks.

I know this because I was contacted by some of these scammers through one of my websites.

When the email first land in my inbox last month, I was pissed off. Why so angry?

Because there are too many assholes with no morals in this industry taking advantage of people, but I’ve made no secret of my feelings about that part of the industry.

After my anger simmered down, I decided to play ball with these assholes and see what I could discover. I wanted to know who was behind this and what site was benefiting from this.

And yeah, I know what some of you are probably thinking…

So, about a week after a post went live on one of my sites, I get the email below referencing said post and including the featured image as an attachment to the email.

Just taking that screenshot makes me angry at these idiots again. See how they’ve throw in the free stock photo sites with the paid ones?

They did this on purpose cause they know that loads of people are using them and plenty of other assholes are actually uploading copyrighted images to those freebie sites, which can inadvertently get you in a load of trouble down the line.

So, they’re playing on your fear.

The fear you have about getting sued for thousands of dollars cause you’ve seen those stories in the past from Getty Images suing people — that’s why they put Getty in their list of photo sites.

Also, don’t even get me started on the verbiage “against the copyright policy.” This tells me that I’m dealing with a non-native English speaker, probably cheap labor hired out.

But hey, don’t worry if you bought from one of their “market partners” cause there’s no issue. Fuckers.

So, the first thing I did was try to go to the site from the email address. There’s no live site there.

Apparently this is a relatively new scam, or maybe their previous email address got burned? 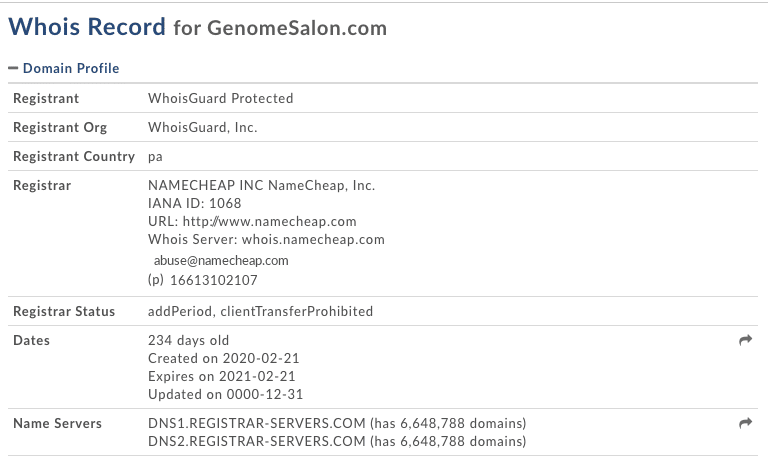 And you’ll notice that they don’t really give away much info in that initial email. Who is their “client” and what is this link supposed to be?

That’s what I really wanted to know – the site that is benefiting from this.

An hour after receiving the email, I sent this reply:

Remember, I was still pretty mad, so I knew that I had to keep my response short before I ended up sending what I really was thinking.

It took them 13 hours to reply.

Based on that timeline, I was confident that at least whoever I was emailing with is located in Southeast Asia. Clearly the first email was sent toward the end of a workday and the reply I got at the start of her workday.

That’s really the only part of the world that makes sense, unless it’s a freelancer working odd hours.

Finding Out The Site Benefiting From This Backlink Scam

Eager to score that backlink, these people gave up the site that’s benefiting from this scam immediately. I honestly didn’t expect that.

There’s also a new person now with an email address from a completely different domain than the first person. So, let’s start with that first. 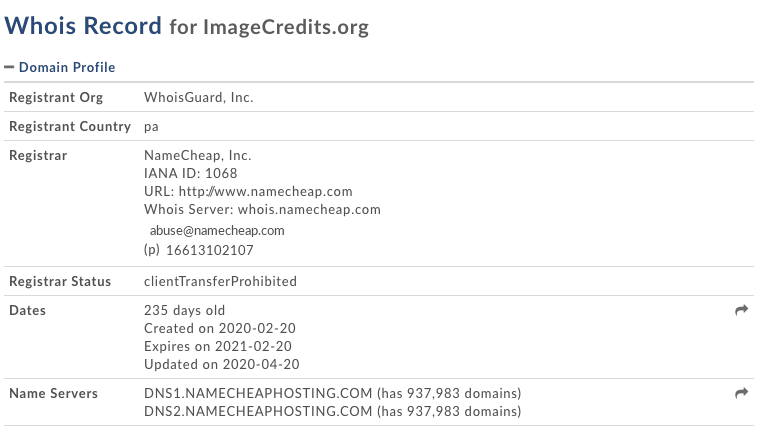 Looks like it was registered one day before the other site above.  Surprisingly, this one does have a live website.

Though, they seriously half-assed it. 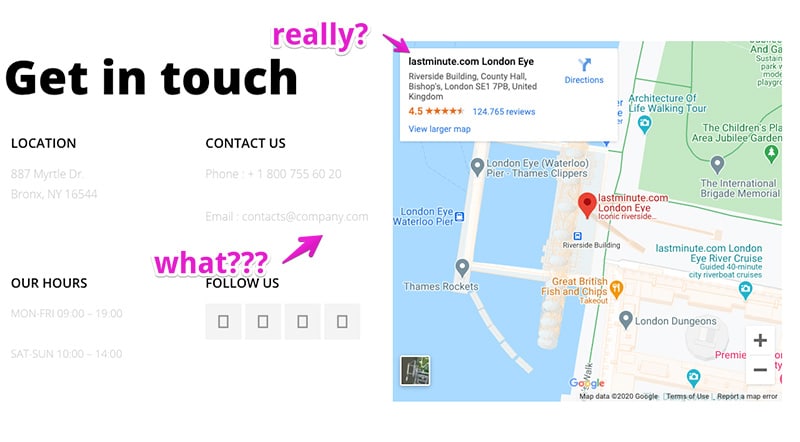 I mean, really? You’re going to all this trouble to scam people and you can’t even be bothered to finish filling out the site template?

And then the “about” tagline that you see in the image up above seems to be stolen from another site. I only found it after looking to see who they were linking out to in blog posts on this “Image Credits” website.

Now, on to the site that I’m supposed to be linking out to with this little scam.

This site looks like it’s been registered for a really long time, but it’s clearly just an auction domain that someone used to create an affiliate site.

And I see that it’s not hosted on the same account as the previous site. Would’ve made it too easy, eh?

This theory is confirmed with a quick look at the Wayback Machine.

It’s always interesting to look at sites like this in the Wayback Machine cause you can learn a lot. For instance, we can see that in early 2019 the two guys currently listed as coaches weren’t actually part of the site yet.

But the three fake personas were still there (reverse image search those images and you’ll find them being used elsewhere).

I gotta hand it to whoever owns this site though cause they went the extra mile to create the fake LinkedIn accounts like I do sometimes. Shame they went to that extra effort and still used a men’s hairstyle photo they found for the person’s headshot.

But we do have two legitimately real people on the About page, the previously mentioned coaches.

These two guys seem to be trying to do their own thing with their Bold Brothers Fit brand, so I don’t really think that they’re actually the ones behind this site.

But a quick look at their YouTube channel shows how they might have hooked up with someone else who is running the site. They spent quite a while in Thailand, specifically living in Chiang Mai and hitting all the spots where SEOs hang out, like Food4Thought.

And the Facebook page for their brand confirms that this is a collab. Likely someone doing what’s being called “the influencer pitch” and getting around E-A-T by making them the face of the brand.

These two brothers probably have no idea that this shady as hell shit is going down in their name.

Or maybe they do? You can see on Facebook which Chiang Mai SEOs they are friends with on their personal accounts.

Obviously, this still doesn’t tell you who is really behind the fitness site benefiting from these scammed backlinks. I’ve discovered a few other things that give me a pretty good idea of who owns the site, but I’m not publicly sharing that because anyone who thinks this kind of shit is okay to do is not really anyone whose radar I want to get on.

And in case you’re wondering if this scam is working for the piece of shit running it, the answer is sadly, yes.

Would be a shame if someone with more time on their hands than me contacted all these sites and got those links removed.

How My Conversations With The Scammers Ended

After getting the response back with the link I was supposed to be using for this little scam, I simply didn’t reply back to the scammers.

I was curious if they would follow back up with me, or if they’d just assume that I’d fallen in line and given them that link.

Five days later, they followed up with me on their own.

What a curious thing to ask someone that you’re accusing of copyright infringement – let me know what you think about it.

Oh, I had some thoughts.

But, I decided that I’d see what else I could get out of them, so this was all I sent back in reply later that same day.

That was the evening of September 22nd, and I haven’t heard from them since.

Yeah, these idiots didn’t even have the supposed infringing photo live on the “client” site. I mean, if you’re going to run this scam, then at least go all in on it.

And in case you’re wondering about the photo on my site that started this whole thing – it was a stock photo that I got from Deposit Photos.

I knew immediately upon getting their first email that it was a photo I’d paid for simply because the post was so recently published. But I also have a spreadsheet where I keep track of all the images in all the posts across all my sites – that way I don’t have to worry about shit like this.

So, watch out for this scam hitting your inbox. And if you’re not already making a note of where you source your images, then it’s a good time to start that spreadsheet.

10/15 Update: Since publishing this, it seems to have been shared in some Facebook groups that sent it a lot of traffic and brought it to the attention of the person who owns the site that was requesting the backlink.

The funny thing is that just yesterday I’d gotten an email from a third person/email address associated with this website. Only now, they were asking to pay for a link instead of scamming it.

Mental, eh? I was gonna troll them a bit and see what info I could glean from them.

But then, this morning (October 15th) I got online and discovered several messages from the owner of the site at the center of all this. Crazy times we’re living in, eh?

Turns out the site owner thought I’d narrowed in on them as the de facto owner, though that wasn’t entirely true for me. But hey, maybe I have a future as a very convincing internet detective, eh?

So, after a brief chat with the site owner, I have agreed to remove the URLs of his site in the previously published screenshots.  But stay vigilant because I suspect there’s not just one link builder doing this sort of stuff out there.