What’s Happened Since The Last Update?

If you’ve read the previous updates, then you know that I’m not actively working on site #2 right now as I’m choosing to focus on growing site #1. So, it’s been about six months since I’ve posted any new content on that site. This means that the earnings you see since December 2016 are completely passive due to my purposeful negligence on the site.

For site #1, I have also been focusing on doing outreach to gain links via guest posting. That is going well and I’ve managed to add a total of eight new guest post links pointing at the site in May.

As previously mentioned, nothing new has been added to site #2, since site #1 has been getting all the love 🙂

What’s interesting to note here is that the number of keywords went down for site #1 and up for site #2 (see last update’s numbers). I can also tell you that for site #1 I lost a featured snippet in late March for a good ‘best PRODUCT’ keyword that cause a dip in traffic and earnings. So far, I’ve been unsuccessful in reclaiming that featured snippet.

I’ve had some requests for more data on the two case study sites, so I’ve taken screen shots of each one from Google Analytics. What you see below covers the period of Jan 1, 2016 through May 31, 2017. 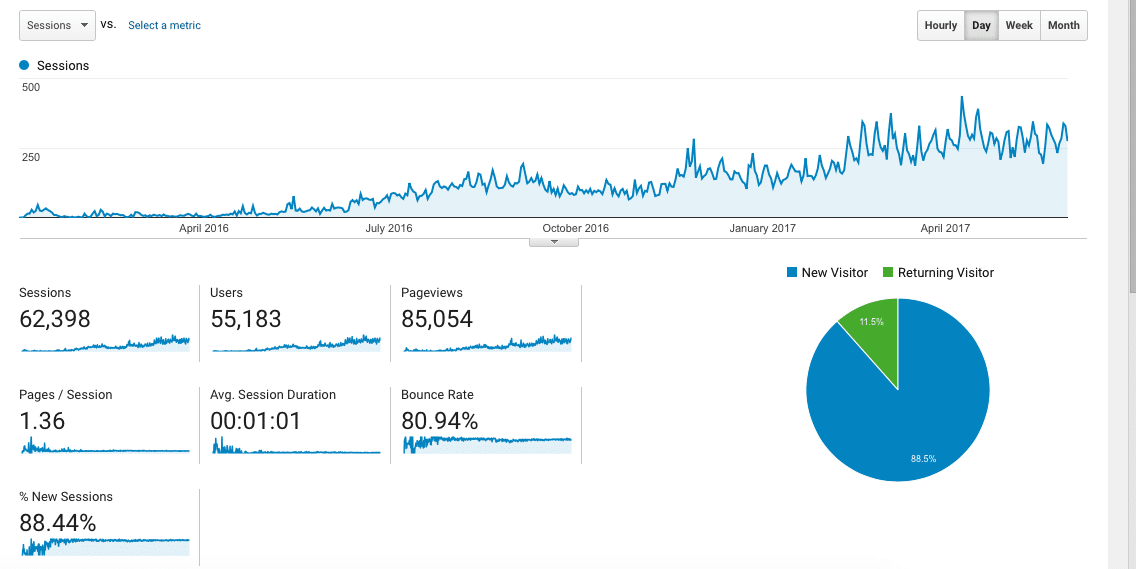 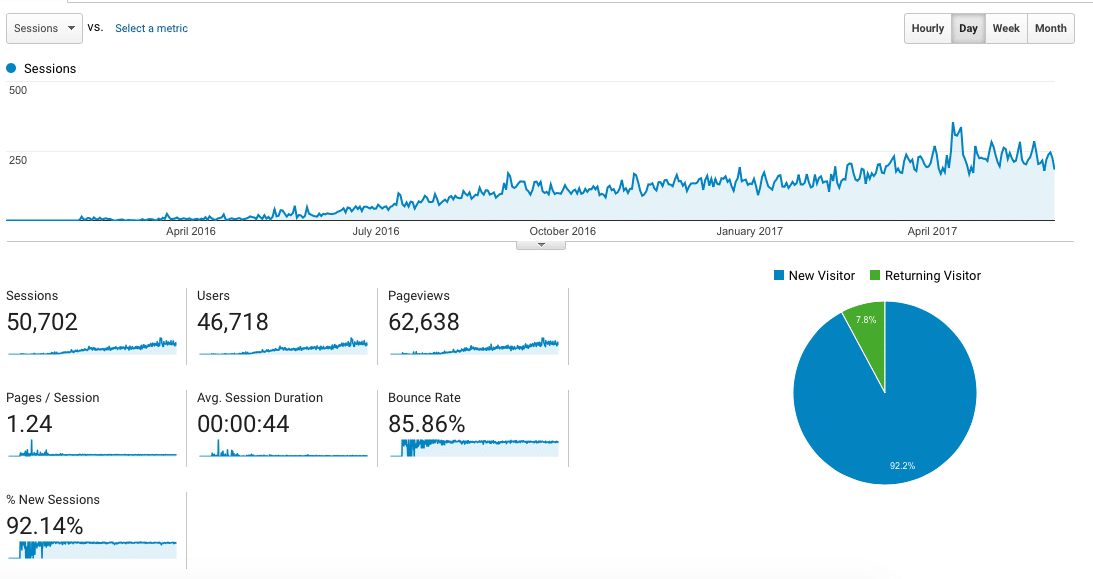 So, for those of you who requested this data – hope it’s all that you dreamed it would be! 😉

As you’ll see below, the Amazon commission decrease for my product categories is taking its toll on my income. You can also notice the drop in site #1’s income when I lost the featured snippet. Quite the decrease, eh?

While these numbers are decent, I won’t lie and say that I’m happy with where site #1 is right now. Though I am happy that the commission decrease doesn’t seem to have had much of an effect on site #2’s income.

Though I’m not happy about where site #1 is at with it’s earnings (especially considering my income goal), I’m not really all that worried about it. Site #1 still has around 70 product categories for me to make money posts about, so I’m still confident that I can get the earnings up. Plus, I’m working on getting new backlinks for the site, which will help boost rankings and income. Mostly I’m just annoyed that it’s going to take me a bit longer to reach my income goals for the site.

And, thus far, I’ve had little to no luck with my attempts as using other affiliate programs on site #1. So, I’ll still be tweaking that and seeing if I can get some diversification going on.

Though it’s really boring, my focus right now is on adding more money posts to site #1 and getting more “white hat” backlinks for site #1. And, I keep testing new changes on my money post that lost the featured snippet. Hopefully one of the changes I make will help me get it back soon since my highest trending month for it is approaching. Honestly, I’d really love to hit my income goals sooner rather than later cause I really hate the niche of site #1 and don’t want to work on it!

I’m also considering starting a brand new site in a different niche with my students that is completely white hat from the start. If you’re interested in that follow-along, then you’ll want to get on my email list (link in sidebar) to be notified when I open my course again (sometime in the next couple of months). Students who are in my Insider Facebook group will see the actual live site and everything that I do with the site from the start. Currently I’m only offering access to the Facebook group for students in levels two and three of the course.

Got something else you wanna know about the two case study sites above? Let me know in the comments and I’ll see if I can include it next time (or just give you the answer below).

P.S. A quick shout out to Tim Gouw for this CC0 license photo at Pexels that shows just how I feel about site #1’s income levels!

Other updates to this case study: