I’ve used WriterAccess to outsource content since late 2014, and I’ve been outsourcing around 50,000 words per month there since the start of this year. It’s been my #1 recommended place for outsourcing for quite a while. I have a team of writers there that I really love, but I also send a lot of articles to the general writers pool.  Back in the day, I got my start earning money from home as a freelance writer, and WriterAccess was always one of the best places for me to get paid to write. So, I guess I have a bit of a special appreciation for them. But that lovefest has officially ended.

You see, I’ve recently decided to turboboost the content production for my sites. So, in addition to content for any clients that I take on, I have been ordering more and more content for my own sites. And recently I have been plagued with writers at WriterAccess taking my orders and sitting on them until the very last second that they are due, and then releasing them. When this happens, the titles go inactive and I have to go back into my dashboard and re-send them to the general writers pool, which prolongs the time that it takes for me to get a completed article back from the writer. You can see how this can be a problem, right? Especially when you are working on deadlines for clients.

Well, yesterday morning, three different writers abandoned articles at the last minute, followed by an additional two instances of that this morning. And this doesn’t count the times that it happened the previous night, or earlier in the week. And some of the writers had taken more than one title, so they were releasing more than one at the last minute! The writers were rated different levels, so I knew that it wasn’t simply a problem with the skill level of the writers. And let’s be honest, even if they were all level 2 writers, it wouldn’t have changed anything. My instructions include a sample article as a style guideline, some additional information, and a request to ask me any questions immediately upon picking up the order instead of waiting until the last minute.

Frustrated by this growing trend among the WriterAccess writers, I reached out to the staff via their help desk to see if they could suggest something that I could add to my instructions to prevent this sort of thing from happening. In the image below is the response that I got back. 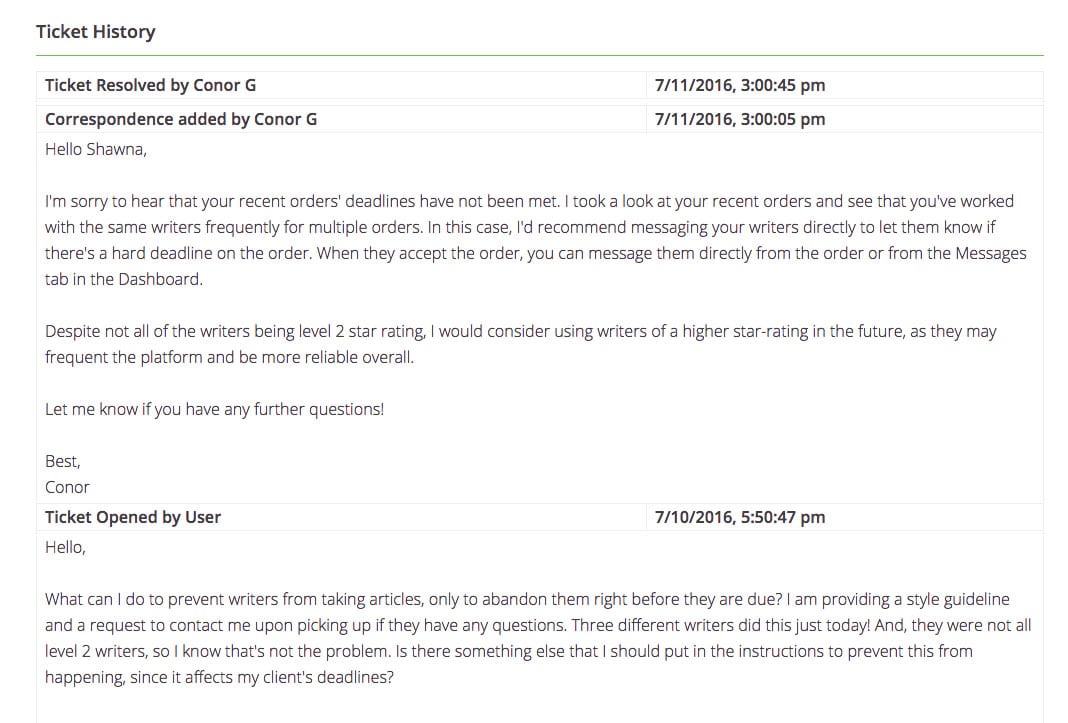 What an amazingly non-helpful response. He may as well have said “We don’t really care, but we’d like more of your money and suggest that you babysit the writers.” The best part is that he immediately closed my ticket.

At this point, I’m mostly just baffled by this response. What kind of business has someone spending thousands of dollars with them and responds to problem with something like this? Needless to say, I’ll be winding down my business with them and moving on.

If you are using WriterAccess for your content outsourcing, or considering them, then I want to you to know that the platform does seem to have some problems right now (at least in my experience). And, in my opinion, they don’t really seem that interested in fixing them. But hey, if you don’t have any real timeline of when you want your content completed, they might work out just fine for you.

2 thoughts on “Outsourcing Content: Does WriterAccess Really Deserve Your Business?”