I’ve been in this industry for a long time. I started out in the personal finance niche doing Adsense-focused sites and then switched over to affiliate sites, which is where most of my time has been spent.

I love SEO, writing, and the whole game of ranking a site. But more than once I’ve thought about selling all my sites and leaving this industry completely. (I’ll get to the why in a moment.)

While comparing your success to other people’s is a fool’s errand that does more harm than good, it’s difficult to not get taken in when you hear about seven-figure exits.

Think about whatever site it is that you’re working on now – could you imagine working on it for several years with just a handful of writers and scoring a seven figure exit? Sounds pretty great, eh?

You see these stories of six-figure and seven-figure exits and start daydreaming about your own exits. You do some back of the napkin math to determine how much you’ll need to spend on content and links to achieve something similar.

After all, the person in the thread told you about their zero link building, and their small team, and the thousands of words that they published each week to accomplish this feat. Sounds like the blueprint is there for the taking, right?

All you gotta do is follow this little paint-by-numbers plan and you, too, can be in the six or seven figure exit club.

But they didn’t count on anyone reading to actually find their site and see the reality of it all.

Now don’t get me wrong, I don’t manage a fuckload of sites for the lols. It’s for the cash and it pays well but I really, really, really hate when I see these success stories that make it sound so easy.

And yeah, I’m sure there really are people out there crushing it big time with minimal links/people/etc. Statistically these people have to exist.

But you see, in my experience, there’s usually something shady going on in the background that’s not being disclosed whenever someone is telling their too-good-to-be-true story.

Lies are almost a form of currency in this industry.

And no one seems to really care. That is really unsettling, no?

Contents show
So Many Lies
Now What?

Lies like creating a fake persona where you say that the person was famous in the 90’s as a psychic to the stars…yet you forgot to rename that pic you’re using for this persona that you really swiped from a random hairstyle site.

Lies like saying ‘we only add $20 to $30 per link to the costs, so you’re not gonna get this link cheaper on your own’…but then accidentally sending an email with the real up-charge amount listed. Whoopsie. 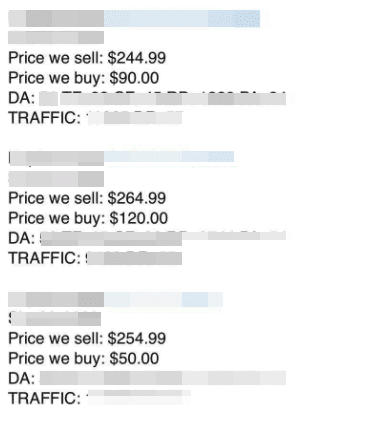 Lies like manipulating Ahrefs metrics and then selling guest post links on sites that are basically worthless….according to a podcast I listened to last week. On that same podcast it was casually mentioned that everyone’s favorite SEO holds his case studies/test results for a year before releasing them 🤯

Lies like saying ‘I’ve done no link building at all to the site’ it just took off cause it’s better than the competition…yet linking to the site from other high DR sites that you own. That’s a backlink, ya asshat.

Lies like saying ‘I’ve never been hit by an algo update or gotten a manual penalty…yet all the SEO traffic tools show a different story for your site.

Lies like trying to sell me a site that you’ve ‘only done white hat guest posting on’…yet SEO tools show the expired domains you’ve 301’d to the site…or the PBNs…or both.

Yeah, that really happened to me last year with the 301’s from expired domains. Mind blowing, eh?

So, what should you do with this information? I’m not trying to depress you about the state of things, I just want you to keep in mind that there are very few people in this industry who are worthy of your trust.

I like to call out bullshit when I see it and I’ve made no secret my distaste for most of the thought leaders in the industry. But at the same time it’s hard to stay in this industry and be excited about it when you know that so much bullshit is happening.

So, if you’re buying sites, then please do yourself a favor and do some in-depth due diligence because I have looked at so many sites for sale, both at broker marketplaces and privately, and people try to get away with all sorts of shady shit that they hope you won’t notice.

And if you’re taking advice from people, then consider their motivations and what’s in it for them. Some people genuinely like helping people – that’s me to a degree, but sometimes I get tired of all the emails and step away for a week or so.

But I can tell you with complete honesty that my motivations for writing this post were not 100% focused on protecting you. Sure, that’s part of it. It’s also cathartic for me to get out all these frustrations.

Some people are “helpful” because it boosts their own brand, they get affiliate money from it, they’re actually scratching someone else’s back, etc. A good example of this is anyone who legit recommends Bluehost as a good hosting option.

Some people are “helpful” because they want to give you bad or outdated info to maintain their competitive edge while you continue to struggle.

Unfortunately, I don’t have any real solutions here. The nature of things is that we have to interact with, and sometimes do business with, people who are not trustworthy.

And I’ve encountered an abnormally large number of those people in this industry. You probably will too. And that disgusts me.

When you find someone trustworthy, hold onto them and soak up all the knowledge that you can. The most helpful and trustworthy person I’ve found in SEO, a guy named Dave, actually left the industry completely a few years ago.

So, with that rant over, I’m taking off the rest of the month. In the mean time you can check out my appearance on Doug Cunnington’s podcast here or on his YouTube channel here.