SEOs Are Going Crazy Over AI Writing Tools - Why? | Skipblast Skip to content

I’ve been watching the craze over AI writing tools, primarily Conversion.ai and it’s Jarvis, with some interest in recent weeks.

Like most people, an affiliate marketer is how it came to my attention.

And whenever you see that happening, then you know that the affiliate is program is a good one.

That’s also when it’s a good time to question the product quality, but anyways, let’s dig into this a bit deeper.

One of these days, I’ll cleanse my inbox of some of these marketers, but you gotta admit the headlines promoting this tool (software?) have been entertaining.

You get the idea.

Then Surfer announced they have an integration with Conversion.ai and you’d think someone from Google was giving out ranking secrets the way people have been acting over it.

So now all the results on page one (at least temporarily) will have the exact same content written by a robot.

The reason that this whole thing has been so interesting to me is that I’ve been in this industry a long time – and I’ve seen this before.

Maybe you have too?

Does this blast from the past look familiar?

Then at some point after these old school spinners we ended up with WordAI entering the market and people were shitting their pants over it as well.

Yet, here were are, several weeks past the start of the hype for Conversion.ai and I’ve been waiting to see if anyone is going to call it for what it is.

The only difference between the new stuff and the old stuff is that you no longer have to enter in things like {cheap|inexpensive|low cost|good deal} to spin your content.

This is 100% not the “cheat code” or the “fastest” way to write articles that rank.

Yes, I Tried It

Now, before you call me a hypocrite, you should know that I only took the trial run of Conversion.ai because I don’t like to shit on products/tools/services without having personally tested them out.

So, I signed up for a trial via someone’s affiliate link and got the free 10,000 credits of “content” to take it for a test drive.

You’ll notice that it didn’t take me long to test things out. 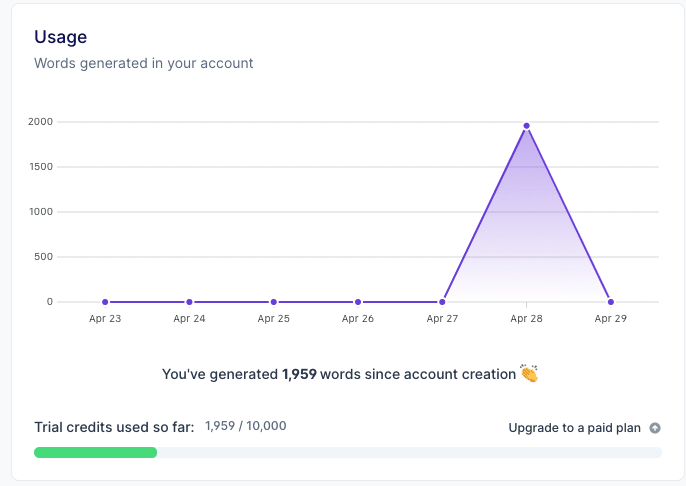 I tried the much heralded long form content option.

Is it better than the article spinners that I was using a decade ago? Yes, but that’s not saying much.

Let’s say that you can rank it – then what?

The worst thing I’ve seen to come from this so far is that some people are using it to submit samples for freelance writing gigs….like it’s not obvious that it’s AI-written.

I obviously cancelled my account after this little test drive.

There is one really nice thing about this being the current ‘shiny new object’ that people are obsessed with – those of us who don’t use it are going to see an advantage over those that do.

It’s just like with the old school article spinners – they were never a long term play and just a means to a (temporary) end.

Though, I do have to say that Conversion.ai is much more user friendly than the old school spinners.

If you’ve been sitting on the sidelines marinating in your own FOMO, then I hope this helps cure you of that.

And remember, there’s one really good reason for all those marketers to be shoving this down your throat.

Recurring 30% commission each month – for lifetime.

And you have to spend at least $109/month to get access to the long form writing assistant.

That’s almost $33 every single month for every single chump they get to sign up for this article spinner. Don’t end up a chump.

The reality for you and me is that there aren’t any real shortcuts to success…unless you end up with a large following where you can promote shit like this (and not feel guilty about it).

The most successful people I know in this industry don’t take shortcuts – they just focus on the basics.

14 thoughts on “SEOs Are Going Crazy Over AI Writing Tools – Why?”