Back in October I wrote about the shady practice of some SEOs who are contacting people and claiming ownership of pictures that aren’t theirs.

As if that isn’t being enough of a slimeball, these pieces of shit act like they’re doing you a favor by continuing to let you use the image.

All you have to do in return is link back to their site.

Sounds like somebody has been reading Robert Cialdini’s Influence: Science and Practice and attempting to put the rule of reciprocity into action.

After writing about this back in October, I have had this happen to me several times since then.

A few days after I wrote about my experience with scammer site #1, I got an email from a completely different site.

Before I even looked into it, it was obvious that this was a completely different person than the last douchebag. But here’s the basics of this one:

I should note that this email arrived in the inbox for the same site that the other scammer contacted…but it was a completely different image.

Anyways, here’s the response I sent back to this email:

And I’ve not gotten anything else back from this site.

It’s now been several months and this site has really half-assed their attempt at this scam. I’m hoping they grew a conscience.

November rolled around, and I got contacted by another completely different site.

But there’s a twist.

As soon as I saw the email, I suspected that this new site was owned by the same person as the very first site that contacted me.

My favorite thing about this email is the “comment end” bit – I guess someone needs a bit more experience on Dragon Naturally Speaking before sending out a bunch of emails? Or maybe they were transcribing directions?

Who knows, but it did give me the lols.

So, I replied to this email with this gif:

And after reading this email and suspecting the same owner as site #1, I went to the site and knew that had to be the case.

If you recall, that site owner actually found my original post and contacted me in a panic requesting that I remove the URL. 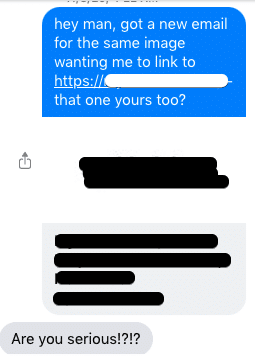 I’ll spare you the rest of the Facebook messenger conversation we had about this, but it’s always cute when someone thinks you’re super gullible, isn’t it?

A few weeks later, and another dipshit claiming to own an image that was not his.

Based on my digging, this site is probably owned by the same person as site #2 above.

Though this domain is coming up as registered in UAE instead of Australia.

The image in reference for this scamming attempt was actually something that came from Wikimedia Commons, so a slight twist on the template these dickheads seem to be sharing amongst themselves.

So, at this point, I’d grown tired of responding to these idiots and didn’t even reply to this email.

But it didn’t stop the follow-up emails from landing in my inbox.

Really love the request to remove the image if I’m not going to credit his site. What a piece of shit.

We got into December and that means a new douchebag sending me emails about an image that I got from Deposit Photos.

And, he’s referencing the same post/photo that sites #1 and #3 emailed me about.

So, at this point I’m thinking there’s a group of these fuckwads all working off the same shared Google Sheets list of sites.

This one really pissed me off due to the threat of legal action.

Then I noticed that this dude is a real idiot. Like super-sized mega king idiot of idiots.

Because he’s sending out these emails from a ConvertKit account….and I’m pretty sure they close accounts with no refund for this sort of thing.

I don’t doubt that you can also lose your domain and/or hosting for sending out loads of emails making fraudulent claims and threats.

I know I’ve heard of people losing their AdSense and Amazon accounts for this sort of thing.

And apparently there is a small team of people behind this particular flavor of bullshit.

Why you would create a LinkedIn account with this info when you’re trying to scam people is beyond me.

I’m still not sending any replies.

He doesn’t let that stop him (and yes, I know he’s likely using an automated email thingie).

Fast forward a few days and it’s another email in my inbox…with one noticeable difference.

Guess I’m not the only one who noticed that. Now I’m interested in seeing how this plays out for him over the long term.

The lack of morals in this industry is really depressing.

Anyways, dude took some time off for the holidays knowing that most people don’t reply in a timely manner during that time of year.

He’s added a postal address to his emails now, so I suppose someone reported it and he’s gotten in trouble with whatever he started using after getting his ConvertKit account closed.

And I’m pretty sure he doesn’t know the meaning of the word “final” based on the subject line of these emails.

Lest you think these emails have stopped, here’s the most recent one from 10 days ago.

Now, it’s a specific post he wants the link pointed at.

And yes, I’m starting to think Sumit is going to continue emailing me until the day I die. Fortunately, my site is being sold, so I won’t be hearing from him for much longer.

But I wonder about the other website owners who are dealing with these emails.

Based on the fact that Sumit’s emails have started landing in my Spam folder, some people are clearly marking them as spam. And he’s gotten in trouble with at least one, but maybe two, email services.

So, since my last post on this topic I’ve gotten a fair amount of emails and messages from people who have had this happen to them, as well as people making guesses as to who these site owners are. 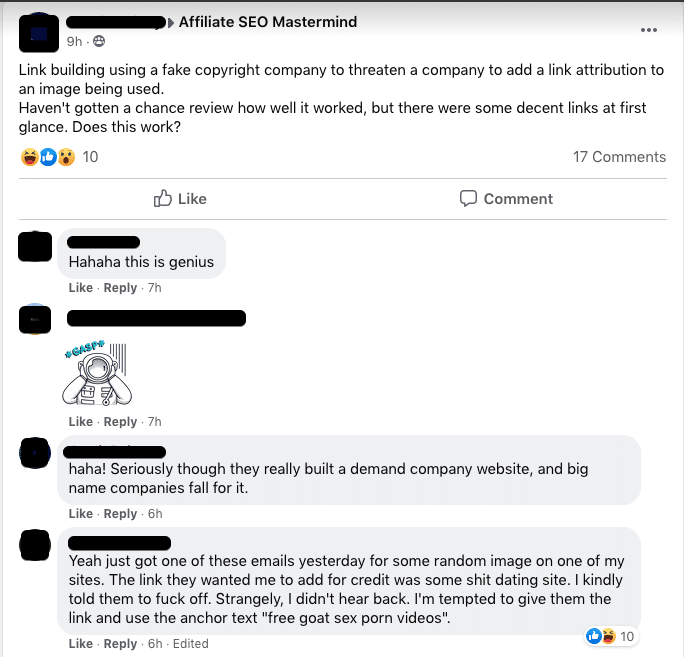 That post has since been removed and I failed to screenshot the rest of the comments.

But, this isn’t just an isolated incident with me and my site.

And I suspect that some assholes took inspiration from this now removed Facebook post and started doing this after learning about it. Definitely the dude who thought it was “genius.”

I’ve even randomly stumbled upon other sites doing this little scam when checking out sites in Ahrefs.

Wonder how long they can keep this up?

Wonder how long before someone gets more pissed off than me and takes down one of these sites?

Wonder if any of these despicable excuses for human beings will realize their moral compass is severely broken?