It’s been 10 days since I’ve done any work on my sites because I just moved from Amsterdam to The Hague. And my sites just kept on bringing in them sweet monies…that’s the benefit of creating sites like this.

So, if seeing these income reports isn’t enough motivation for working on sites, then knowing that I spent 10 days not working (but still earning) should do the trick. I actually spent around two weeks in total not working because my birthday was last month and I took some extra time off for that.

Honestly, being able to take several weeks off while still earning is the biggest benefit of having sites that bring in revenue. And why I keep doing this!

Now, let’s see how the month shaped up with me only working around 50% of the month.

**And as always, I’m an affiliate marketer and this post contains affiliate links, meaning I will be compensated if you make a purchase after clicking on my links.

What Happened In June

I spent a lot of time packing and trying to enjoy the things about Amsterdam that I knew I’d miss with my move to the Hague. Like the canal view from my (now old) apartment.

But the new apartment has its perks as well. Like being so close to the sea that I can see it from my living room.

Plus, the wifi is faster! As soon as my new desk and chair arrive, I expect to be able to crank out even more work on my sites since this area of The Hague is much calmer than my previous location in Amsterdam.

Other than my move, the big news of the month that affected me (and maybe you) was Mediavine raising their traffic requirements I had four sites that met the previous threshold for additional sites…but I drug my feet on it and didn’t apply in time.

Oh, and I discovered that one of my sites DID get hit by the big May core algo update. But I don’t really have time to deal with that until maybe later in July.

For this new site, I spent my time focused on HARO link building and I outsourced some content for the site to Word Agents. I’ve used Word Agents for other sites in the past with good results, so I’m confident that they can deliver the kind of quality content that this site needs.

Now I’m up to 10 live posts on this site, which is an okay amount for this early in the game. Honestly, I’m not personally interested in this niche, which means that I’m going to be outsourcing more and more of the content for it.

In terms of links, I’ve had two more DR 80+ links go live from HARO. There may be others out there, but these are the ones that I know of.

And that order I placed at SerpLogic back in April for 15 links got fulfilled last month. The links are all high DA/DR, but lots of them are community blog sort of posts – so, those ones are garbage.

Some of those ones aren’t even indexed more than a month after going live – and yes, this happens when you buy links (even from the really popular places).

All in, I paid $98 per link for these and the links that are not garbage make up for the garbage ones.

The influx of links is helping with the keyword rankings. I’ve now got several keywords in the top 50, and here’s what my best keyword looks like:

Unfortunately though, I’m only ranking for the homepage of the site so far. So, I’m hoping that by the next update there will be some keywords from the posts.

Nothing really to report in terms of traffic because only one person arrived via organic search.

New posts for this site: eight

Summary for site #1: The site now has ten live articles and lots of new backlinks. Still only ranking keywords for the homepage. Will be outsourcing more content in July.

Traffic is still rising on this site, which is good because I’m not really doing anything other than sending links to it slowly. I still haven’t even updated old posts.

So, I think the combination of the two new links + people getting back to some sense of normal in the US explains the rise in traffic. Though it’s only around 600 more people than the previous month.

Fortunately, this month’s traffic rise also resulted in an income rise as well. This is actually the highest income over the past six months.

Summary for site #2: Income is up and traffic is up. Two new guest post links went live.

Well, I knew this was going to happen sooner rather than later, but the big news for this site is that income is down. What’s interesting about that is that the traffic is basically the same as the previous month.

Though, the income decline could be a result of a lot of the equipment that I promote being out of stock.

All things considered though, I feel like the income drop could have been worse. With that in mind, I’m okay with where things are currently at.

New posts for this site: 20

It’s a mix of money posts and informational ones. Though I’d guess than only 20% of the new posts are money posts.

Average word count for these is a bit higher than last month at closer to 1,700 words.

With traffic remaining pretty stagnant, this site meets the new Mediavine traffic requirements. However, I’m not yet applying because I want to make sure that I get approved.

You see, someone in my private Facebook group mentioned getting declined and being told it was because her top 10 posts were to centered on the same topic. I have that same issue on this site, so I’m working on diversifying that a bit before applying.

Pinterest traffic to this site is still growing, with it making up almost 12% of total traffic last month.

All I’m doing with Pinterest is using Tailwind with the Tribes Power-Up that gives me access to 10 tribes. I only login to Tailwind when I publish a new post, meaning that it’s super low effort.

New links for this site: zero!

I didn’t even respond to any HAROs for this site last month.

Yeah, that almost two grand drop hurts a bit, but I was expecting it. Last month’s income is a mix of AdSense, Amazon affiliate, and other affiliates. I use the AAWP plugin on this site as well.

The income drop with traffic remaining stagnant means that the overall RPM also dropped to around $95.

Summary for site #3: Expected income drop happened, but traffic remained about the same. Met the new Mediavine requirements but holding off on applying while I work on building out a new content silo.

Minimal effort again on this one, but since we just hit month six I’ll likely start to ramp things up on it. And, I’m now at 20 live posts, which is a good number to be at for a low effort attempt so far.

And organic traffic has picked up slightly (almost 3% increase, according to Google Analytics). Ahrefs shows that it’s ranking for almost 100 keywords right now, with the best ranking being a featured snippet.

Like I’ve mentioned previously, this topic/niche took a dive in interest with Covid-19 and it’s still not  yet started picking up properly. Regardless, I’m still planning on picking up the pace with this one.

New posts for this site: two

Summary for site #4: Slight traffic increase, rankings on the rise, and got the site up to 20 posts.

Here’s new expenses for the sites for June: 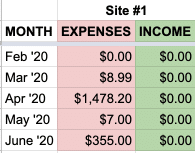 Going forward the expenses are going to continue to rise as I outsource more and more content. Honestly, I’m not even sure if this site will be profitable by years end! 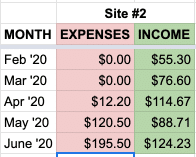 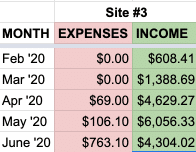 Not much to say here other than I focused on a big content push, hence big expenses for it. 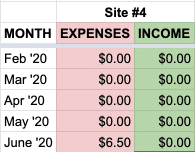 You’ll notice a new expense for hosting. That’s because I finally move it off the old shared hosting account and onto a new Vultr server at Cloudways with another site.

Despite earnings for this little collection of sites being down a bit, I’m still satisfied with where things are at. Since I was expecting the revenue decline for site #3 it doesn’t sting as much as it normally would.

However, now that I’ve tasted having Site #3 at the $6,000 monthly earnings mark, I’m super focused on getting back to that amount. Hence the big content push I did last month.

Granted, we’re already a week into July and I have done zero work thus far…so we’ll see how much I get done by the next update 😉 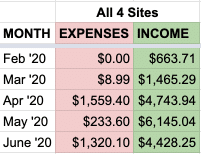 And remember, these four sites are only a portion of my portfolio 🙂 I also want to remind you that sites #2 and #3 were existing sites that were already earning and ranking before starting this whole thing.