Okay, so I’m two months behind on posting these reports, which means I’ll try to keep this update as brief as possible.

So, instead of wasting your time with meaningless banter, let’s just jump straight in.

What Happened In September & October

Basically, just more of the same.

I focused on content, and did not build any links.

And as usual, I didn’t get as much done as I’d hoped – but all progress is a move in the right direction, no matter how little progress there was.

It’s gone from my portfolio.

So, no more updates on this one.

I’ve been seeing some really good RPMs on this site, so I wanted to get more content up to take advantage of high Q4 earning potential.

Better than nothing though, eh?

Here’s a look at how the traffic has been going for the site.

Looks like compared to August, the traffic is down by around 2,000 sessions.

Not ideal and not sure what’s going on simply because I have not had the time to investigate it.

The good news about October is that I didn’t lose any more traffic.

The bad news is that’s because the traffic was rather stagnant with barely any change compared to September.

This is one of those situations where I know that if I can make a big content push that I will be rewarded with a traffic surge.

I just need to take the time to plan out a new topic cluster and outsource some articles.

Now, the really nice thing that has happened with this site is that the income has taken off like a rocket.

It’s even looking like the site will cross the $1,000/month mark before the year’s end.

You may be wondering how this happened with the traffic declining and then being stagnant?

I was able to get this site on a premium ad network as an add-on site.

New posts for this site: 12 (9 outsourced to Writer Access, 1 written by me, the rest created using HARO to get expert quotes)

Last month’s income is a mix of AdSense, Ezoic, premium display ads, Amazon affiliate, and other affiliates. I use the AAWP plugin on this site.

Summary for site #2: A nice boost in income with a slight decrease in traffic, followed by stagnant traffic.

With this site, I decided to set a goal for myself at the end of August to add 500 new posts to the site within 12 months.

That means I need to average almost 42 posts monthly, but there are going to be some low months and high months for me.

I say this because I always take most of December off each year and I already have some travel planned for the first half of next year.

Anyways, I’m curious if I can get close to doubling the sites income simply by adding 500 new posts in 12 months.

Why am I attempting this?

Because this is the site where I was testing my content vs links ROI experiment.

If you recall, or just don’t want to click above and read that post, I added 236 posts to this site within 12 months and saw a revenue boost of $2,500 monthly.

It would be badass if I could repeat that and see an almost $5K increase in revenue.

Part of the content that I’m creating over the next 12 months for this site is going to be part a membership program that I’m planning to add to the site in November 2022. (I’ll disclose more about that once we get closer to it going live).

Speaking of revenue, this site is still crushing it when you compare it to where I was at with the site last year.

But I gotta admit that I am wicked tired of working on this site.

So lately my struggle is motivation.

I have to keep reminding myself about the goals I’ve set for the site because once I add the membership program, I think the revenue will increase to the point of a $500K+ site valuation.

September saw this site lose around 10K monthly sessions, which tracks with with the historical performance of this site.

However, I have lost slightly less traffic than in previous years, which is nice.

I think with school starting back in September and people starting to think about the upcoming holidays, that no one is really focused on working out – hence the traffic dip.

October saw the site lose another 6K monthly sessions, but again this is completely normal for this site.

And again, I have lost a lower percent of traffic month-to-month than in previous years, so even though it’s a drop the signs are still pointing in the right direction.

New posts for this site: 56 (wrote all of them)

The articles were 100% informational.

New links for this site: none

Last month’s income is a mix of premium display ads, Amazon affiliate, and other affiliates. I use the AAWP plugin on this site as well.

So that I did not have to continue reporting to you guys that I’d made zero effort on this site – I actually did some work on it.

But let’s be serious – I did the bare minimum.

I wrote two posts – one in September and one in October – just so I could say that I worked on the site each month.

It’s better than nothing though!

In September, the traffic did increase a wee bit – by around 100 sessions.

So, not much but at least it did not decline!

October saw the site gain almost 400 sessions, so clearly the fresh content (even though it was only two posts) is having a positive effect.

Though income dipped in September, it rebounded for the best ever month in October.

New posts for this site: two

Only has one post live with an affiliate link, and AdSense is bringing in the monies.

Summary for site #4: Two new posts, traffic is slightly up and income from AdSense went down and then up.

If you want to know about any recurring expenses or previous expenses, then refer to February 2020’s report in this section.

Here’s new expenses for the sites for September & October 2021: 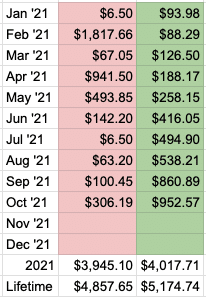 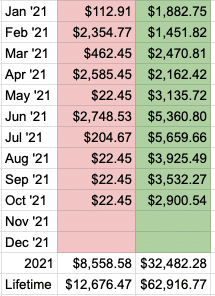 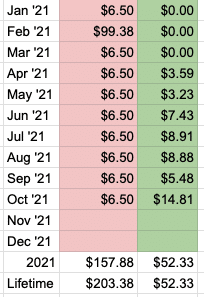 Overall, I’m pleased with how things are going with these sites.

It’s really nice to look back and compare the year-over-year growth and see all that hard work resulting in revenue and traffic boosts.

For a recap, here’s a look at overall expenses and revenue: 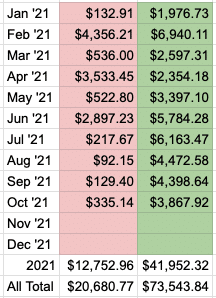 And remember, these sites are only a portion of my portfolio 🙂  I also want to remind you that sites #2 and #3 were existing sites that have been earning and ranking before starting this whole monthly update thing.