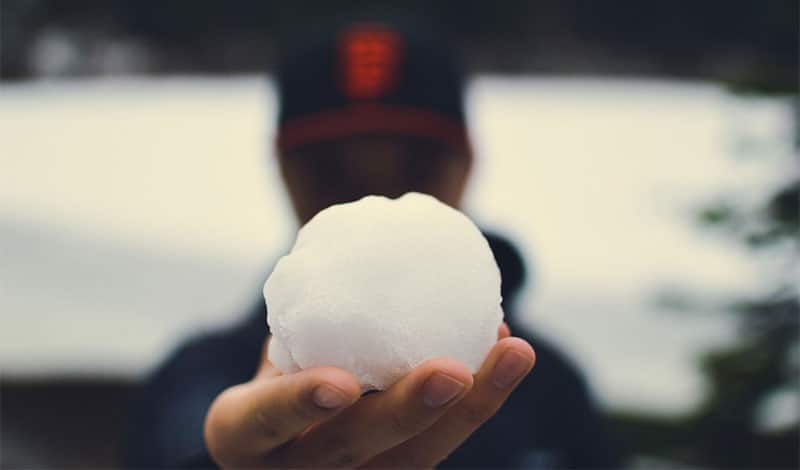 I’ve been in the SEO and niche site building game for a long time. Over 10 years! In fact, I got my start with a personal finance blog in February 2007. Ten years is a LONG time in the SEO world and I’ve seen a lot of changes. But one thing has remained the same, and that is when you take small actions regularly, those actions compound into something pretty big. If you’re versed in personal finance, then you’re already familiar with the magic of compound interest and the compounding effect. It’s a pretty cool concept, and the same thing applies to working on your sites.

Contents show
Why Working On Your Site Is Like Saving Money
Playing The Long Game: A Case Study

Why Working On Your Site Is Like Saving Money

With a savings account, you add money to it, which earns interest. Then, that interest amount earns its own interest, and so on, and so on. It’s like starting out with a small bit of snow, and as this little snowball rolls down a hill, it picks up more snow, which increases its size and momentum, and basically it just gets bigger and bigger. As you might have guessed, this concept is called the “snowball effect” and it is quite common in the personal finance community (in terms of the debt snowflake debt reduction method).

If you need a visual to help this point make more sense, then here ya go (and yes, I know the text is wonky in one section, but you’ll still get the point): 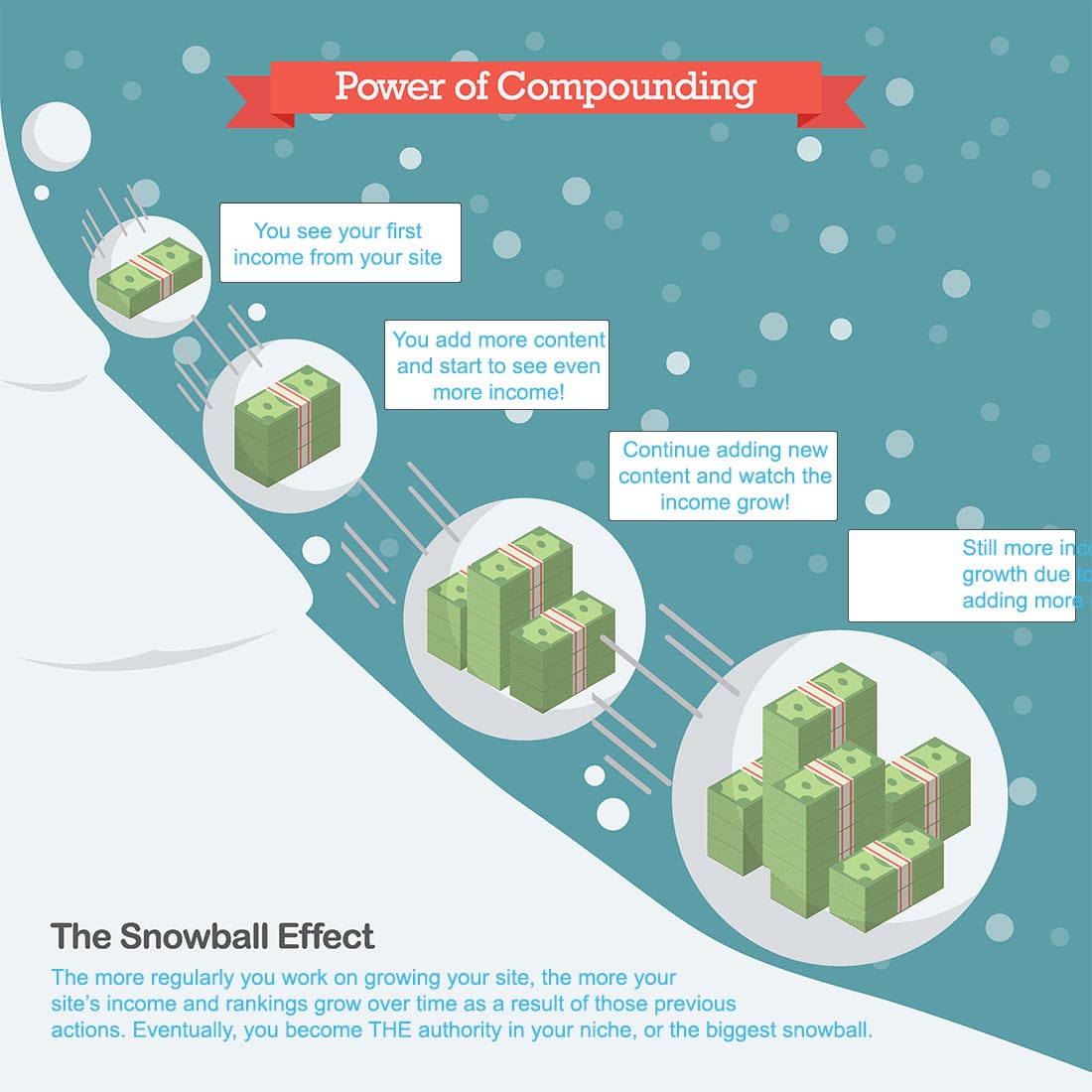 As you can see, the incremental gains of consistently working on your site add up over time to something pretty amazing. If you’re new to making sites, or just a few months in, then I know how depressing it can be to sink all of that time and money into something that is showing minimal or zero financial returns. It sucks. I know because it STILL happens to me sometimes when I enter a niche that is a wee bit more competitive than I first thought.

Finding the motivation to continue working on a site that isn’t making you good money (or any money!) can be a challenge. For me, I just remind myself of the snowball effect and the compounding effect. I know that my actions are not in vain and that, eventually, I will see that light at the end of the tunnel. That’s what got me to being a six-figure a year affiliate marketer.

A lot of SEOs tell you what to do, and how to do it, but they don’t back that shit up with real world examples. That doesn’t happen here. And while I’m not going to reveal the domain name for the site I’m about to discuss, it is 100% real and I’m actually thinking (strongly planning on?) about selling this site in September (after six months on the new Amazon commission structure).

Here’s what you need to know about this site:

When I started this site, I thought ranking it would be a piece of cake. Famous last words, eh? Little did I know that some guru was gonna out the niche as “easy” in a webinar and cause it to get flooded with half-ass SEOs. I see a lot of competitor sites come and go in this niche cause they’re using really crappy PBNs – they rank for a while and then inevitably get penalized. Or some copy the content of my site (or others) and get de-indexed when one of us files a DMCA report.

I thought that I could send less than 5 PBN links, a handful of social profiles and signals, a Hoth package, and some blog comments and start raking in the dough. Why? This is exactly how I’d ranked in this niche before.

In the last six months of 2015, I added those links to the site and here is what the income looked like:

Not bad, but not exactly the income that I was hoping for from the site. But, I did only have 12 posts on the site. That’s right – in six months, I did an average of two posts per month on the site. To be fair, I was focusing on other sites that were already making money, so it wasn’t like I was sitting around doing nothing and waiting for the cash to roll in.

By March 2016, I was ready to focus more on growing this site and I set about adding content to it. At first, it was slow cause I was still writing it myself. Then, I hired a writer in June 2016 and added lots of content to the site through the end of 2016. All in, 36 new articles were added to the site. Of course, this is a slower pace that I would’ve liked, but considering I have almost 30 sites in my portfolio, this was a decent pace for me.

With the newly hired writer freeing up some of my time, I started link building for the site in June 2016 (a mixture of my own PBNs, editorial links, outreach, blog comments, and scholarship links). Between June and November 2016 I managed to add 56 new links to the site (yeah, I was still a bit slow due to working on other sites in my portfolio).

I didn’t have Google Analytics installed until April 2016, so here’s what the year looked like for the site:

And check out what a difference this regular work made on the site’s income:

Seeing the positive movement in 2016, I’ve still been adding content (31 new posts so far this year) and links to this site in 2017. For my link building, I’ve been doing lots of outreach, added in a few more links from my own PBN sites, and even gained some natural links from manufacturers!  So far, I’ve added a total of 43 new backlinks to my site. Here’s what traffic looks like for the current year:

Here’s how the site’s income has been shaping up for me this year:

Nice income growth over the previous year, eh? Needless to say, I’m pretty stoked about the growth of this site. Though I do hate knowing that if I’d had more time to focus on it, then it could be earning even more!

You might be thinking – what the hell happened between April and May?!? I added some pretty epic buying guides that ranked quickly and brought in more income, which seems to be continuing still here in July.

Here’s a look at the site’s lifetime traffic in Google Analytics:

Overall, a decent growth pattern that I’m very happy with! I know it looks kind of weird at the end there with the spikes, but for some reason my traffic has been hitting its highs only on the weekends for a few months now. Weird, eh?

Some of you may be wondering about the content on the site, right? I like to cover a topic until it is completely exhausted. So, some of my buying guides/reviews are only around 1,000 words. However, some of them are around 5,000 words because there is THAT much to cover in order to be comprehensive. I also have a lot of individual product reviews on the site. However, the buying guides are what brings in most of the traffic.

What about the traffic? It’s primarily organic traffic from Google. I also get a reasonable amount of traffic from other sources, but I’m not willing to share those sources publicly in case anyone reading this is in the same niche. But, I can honestly say that the majority of my traffic (over 50%) is from organic search.

Got more questions? Drop ’em in the comments and I’ll answer if I can.