Before we dig in here, just let me warn you that the month was pretty uneventful.

However, I will do a bit of a year in review for this case study site as well, which you may find more interesting.

This update covers the period of December 20th – January 19th, so both Christmas and New Year’s holidays are in the mix to fuck up the traffic a bit.

Despite that, the site did manage to regain most of the traffic that it lost in the previous update.

I’m not surprised because there were a few unconfirmed Google updates during this period. 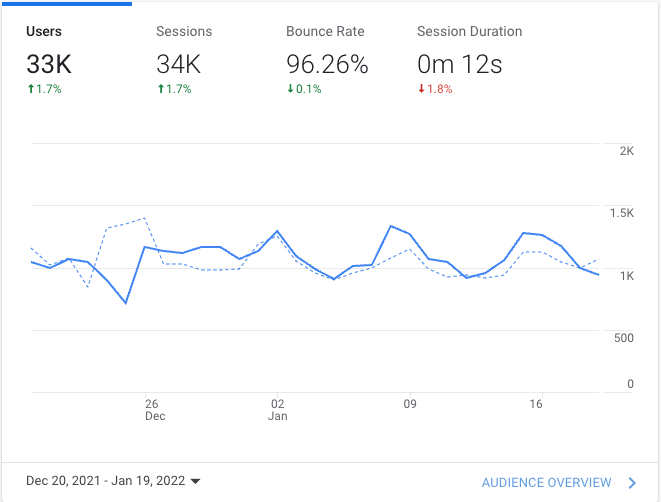 Despite getting some of that traffic back, the top posts for this site are still in flux, which is bad news for the site’s RPM.

Currently, the higher traffic posts are those with a lower RPM, and that means less money in my pocket.

This is compounded by the fact that ad rates are the lowest all year when the new year starts.

Obviously, adding more high RPM content is the way to combat this.

But I didn’t really do that…for two reasons.

And I was also curious where this site would plateau when the content publishing died off, as it has for the most part.

If you recall, I placed that first order for buying guides with NWB back in September.

Those articles were delivered and published at the end of October – that means plenty of time to assess how Google is reacting to affiliate content going up on a site with 400+ informational articles.

Unfortunately, it doesn’t appear to be going well with the affiliate focused content.

I don’t use rank trackers, but I signed up for SERP Robot just so that I could plug in the targeted keywords for these articles, and here’s how that looks – 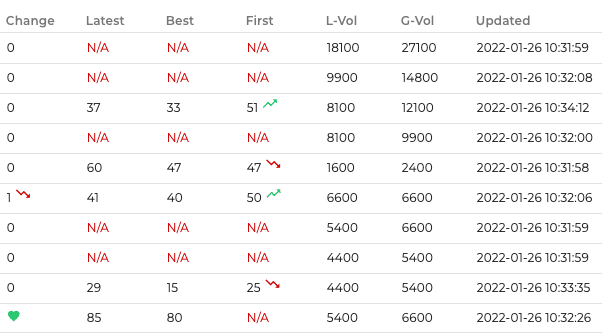 Of course, as SEOs we know that pages rank for multiple keywords, so this isn’t the whole story. 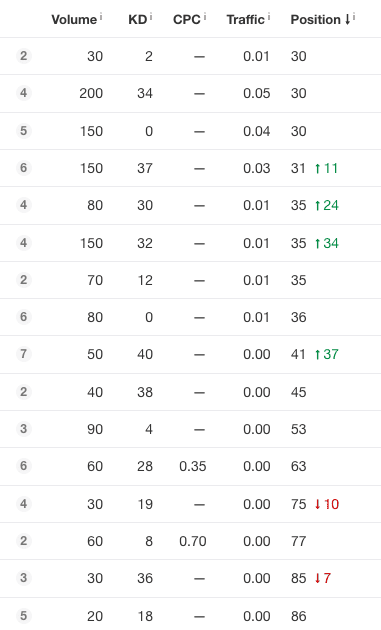 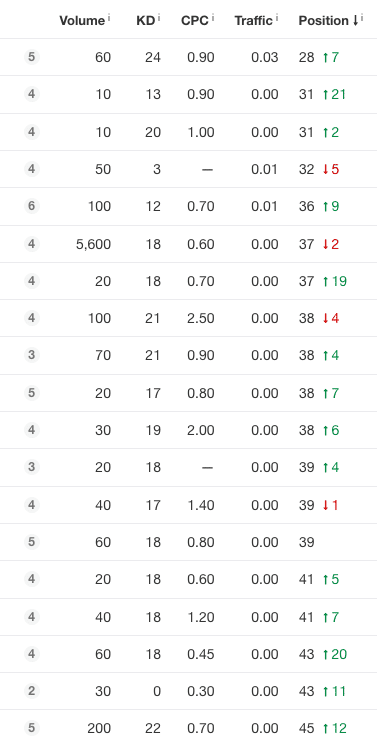 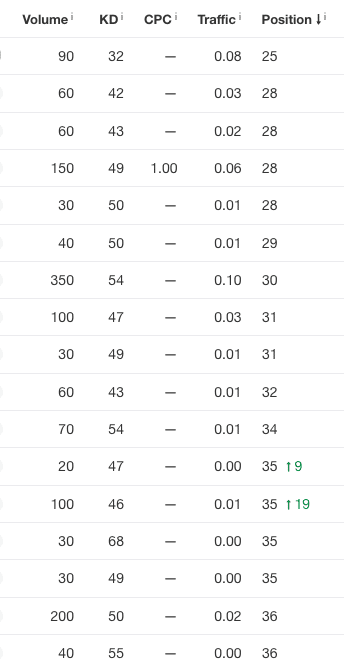 The next batch of articles from NWB was delivered and published on January 5th, so these have not had quite as long to marinate in the SERPs. 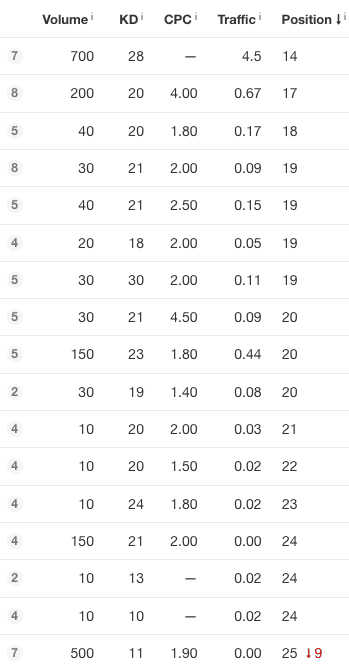 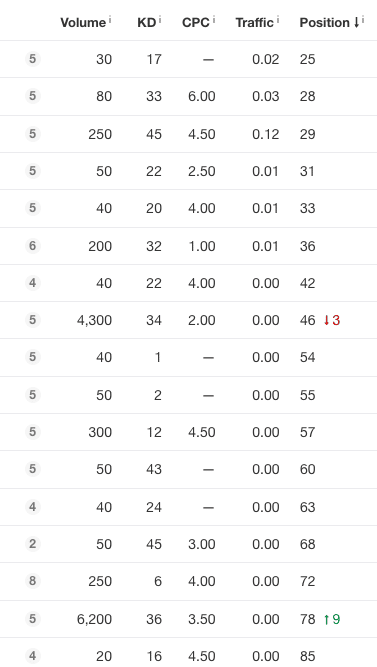 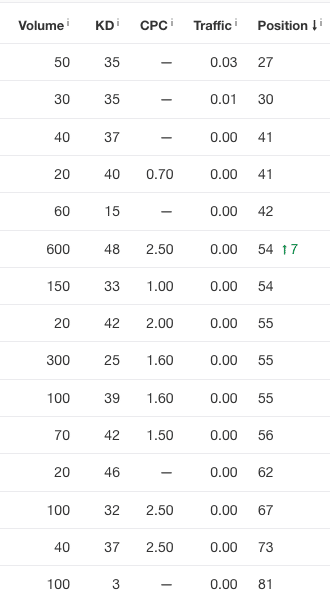 As you can see, with the exception of that first article, these money posts are showing up for keywords — they’re just not ranking well.

I actually stopped my order with NWB for affiliate content for this site because it’s clear that Google doesn’t want to rank it well for money content.

Though I do have a few more articles outstanding from them that will be published soon.

I’ve decided that my time and money is better spent on informational content, which ranks well (and quickly) for me.

What I want to test is creating some topic clusters around those buying guides to see if internal links from a cluster will help push them up the SERPs.

If the topic clusters work, then I will revisit adding buying guides to the site.

Otherwise, the focus will be back to informational content from here on out.

The site also managed to pick up a few DR 40+ natural backlinks during this period, which is nice.

Those links are going to different posts, which is even better.

I’m happy to see that the traffic rebounded a bit, though I’d always prefer more growth.

It’s also nice that good backlinks are flowing in without me needing to seek them out.

I am a bit disappointed that the affiliate content isn’t ranking better, but I’m glad that I discovered it now so that I can refocus my money on content that will rank.

Here’s how the last 30 days of this site looked:

Still not interested in selling the site right now, but it’s nice to see that I could make all my money spent back with a bit of profit if I did sell now.

While this site has experienced growth in 2021, I’m not going to lie — I would like it to be better.

Traffic in January was 16K sessions, and 34K sessions here at the end of the year.

Yes, it doubled, which is great, but I still wish it had performed better.

I’m definitely happy about that.

What I think you will find most interesting is the difference in RPM.

And, I can tell you that for January 2022, it’s looking like the RPM will be around $20 on Mediavine.

That January vs January RPM is quite the difference, eh?

Let’s assume that the RPM stays at $20 for all of 2022 (it won’t but this makes the math easy) – that means I need to get the traffic up to 150K sessions to be able to sell this site for six figures.

Selling this site for six figures is my goal.

Going from 34K sessions to 150K sessions is quite the jump, that means I either need a fuckload more content on the site, or I need to be smarter about picking topics that earn a higher RPM.

Or, get the affiliate content to work for the site, which will boost the revenue and overall RPM for the site.

I need to add 116K sessions, which means if I continue to average 85 sessions per article…I need 1365 articles.

That is fucking insane, so let’s hope it doesn’t take that much new content.

Let’s face it – I clearly have targeted keywords with a RPM that is too low and I need to completely change direction so that I can accomplish this with less content.