There’s a reason that the saying goes, “If you want something done right, then you gotta do it yourself.”

Of course, you’re only one person, and there’s only so much that you can do on your own.

That’s where outsourcing comes in and saves the day.

Sometimes, it just creates even more work for you.

Despite my zero fucks given approach to most things, I really don’t enjoy telling people that I had a terrible experience with a service.

Partly because I don’t like having bad experiences when paying for something, but also because bad reviews can hurt businesses when the owner may have no idea what’s going on.

I say this so you know that I don’t enjoy writing up reviews that aren’t positive, but I want to share my experience because it’s something I’d want to read about a service or company if I was shopping for something similar.

So, I want to remind you that the things I’m detailing below are related to my experiences and my opinion on those experiences – so you may experience something completely different.

I’ve been a customer of WordAgents for a long time. Really long in SEO years.

Most of that time I’ve paid $0.06/word, with the exception of the monthly subscription I started this year and a 10% off discount code I got a few months back – those both brought the cost just under $0.06/word.

I first started using them at the start of 2018 after hearing about the service on the Builder Society forum.

Back then, you had to message or email Vin (the owner) for a quote and then he’d send you an invoice via PayPal.

I’ve also used Reach Creator for some links in the past, which included content from WordAgents. So, I’m well versed in what they offer.

And I feel like I’ve had a long, good experience with them…until a few months ago.

Well, I started outsourcing a lot more content than I usually do. And I spent a lot of that money at WordAgents.

At the same time, WordAgents expanded their offerings to include subscriptions, and it’s clear that they’ve grown quite a bit.

Before I share the things that caused me to stop spending money with WordAgents, I just want to give you a quick background on how I’ve ordered content with them.

I fill out the spreadsheet that I’ve always used with them, which I think they still offer. So, I give them:

Until recently, they way my orders have been delivered is that I’ve gotten content that resembles what’s covered in the competitor examples.

And that’s exactly what I wanted them to do. It’s been this way for years.

But, it recent months something changed. I don’t know if they got new writers for my account or what.

Some of the problems that I noticed on orders I placed in March and April of this year:

Here’s one of the things I think started happening – it appears (in my opinion) that the writers decided to do their own research and selected articles a few pages back in Google to use as “inspiration.”

This resulted in two big issues for me:

Here’s a screenshot of another site’s opening sentence:

And here’s a screenshot from the completed article that I was sent:

The sad reality is that it wasn’t just one article that I got back that seemed to have some of the issues like this, though it was most extreme case (that I noticed).

And you know what, I get it, managing freelancers is hard work.

I’ve had my share of issues with freelancers myself.

But one or two instances is an anomaly, and more than that becomes a trend.

Anyways, I’ve been a customer so long that I thought I had a pretty decent relationship with Vin. So, I tried to let him know about these issues.

I was on a monthly subscription plan and had just been billed two days earlier, which is why I asked to cancel before the next billing. 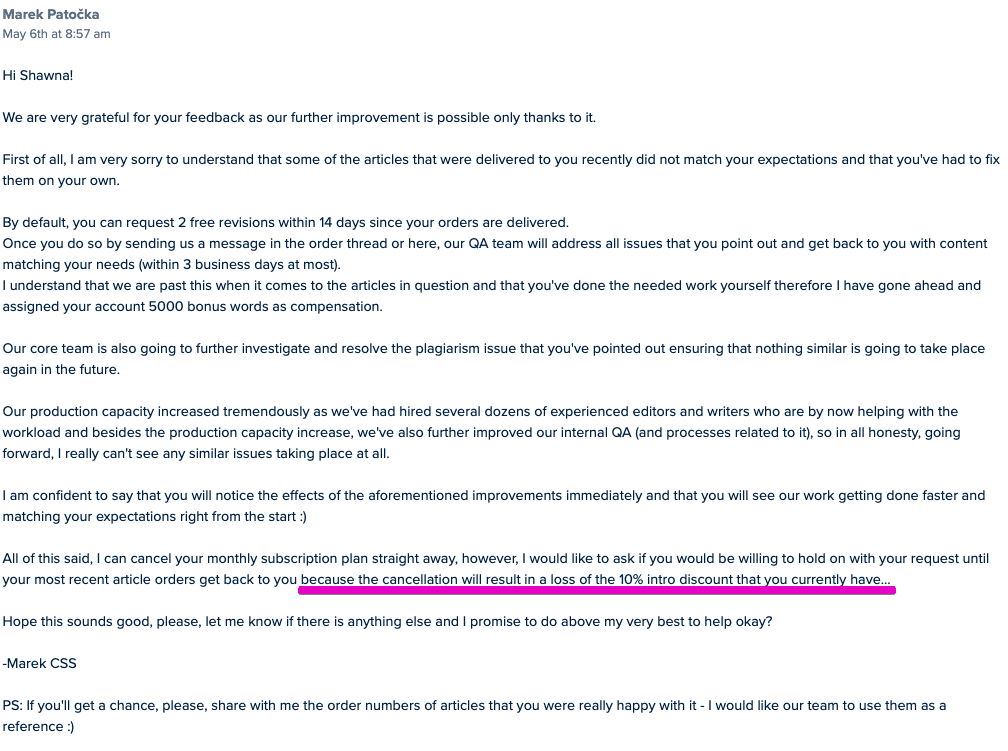 It’s true that, like most content agencies, they offer revisions on articles. And I did not ask for any of the articles to be revised.

In my opinion, revisions are the sort of things you ask for when there are small problems.

That’s why I chose to not ask for them with my batch of articles. I’ll give you an example of one such scenario in a moment.

I also want to point out that I was on a subscription for monthly content, and was told if I canceled my subscription they were going to remove a discount.

Overall, I found this response to be a bit lacking.

I tell you that there’s serious issues and I no longer have faith in your company, and the response is some credits and threat of a discount removal?

I wasn’t sure if this mean they were going to deduct from my current credits, or what. 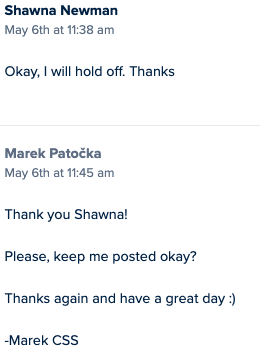 What happened next was truly a surprise to me.

I had lots of articles still being worked on and I got one back that had a paragraph at the end that was almost 150 words about my site.

And before you think that I ordered more words than there was info to write for the article topic, I always try to order fewer words than the competition so that I get a tighter article.

No, I don’t have time to train your team.

I also had one instance in my last batch of articles where the writer linked out to a Google Books URL that was Google Books Philippines, which is always curious when the writer you’re paying for is supposed to be American.

Nevermind the fact that the link was completely irrelevant.

I did cancel my recurring subscription last week, once all of my outstanding orders were delivered.

I’d love to tell you that the quality improved and got back to what I was used to getting from them, but in my opinion it did not.